Corvette Pinball Machine: If you are a Corvette fan, the Corvette pinball machine for you. This is a very fast game based on the popular sportscar. It features an engine that revs and bounces the ball around. If you are looking for a gift for your Corvette love, this is it!

The company was founded as Midway Manufacturing in 1958, as an amusement game manufacturer. The company was then purchased by Bally Manufacturing in 1969, and used the Bally Midway name in the 1980s. In 1973, Midway moved into the interactive entertainment industry, developing and publishing arcade video games. The company scored its first mainstream hit with the U.S. distribution of Space Invaders in 1978. Bally then merged its pinball division into Midway in 1982. In 1988, Midway was purchased and re-incorporated by  After years as a leader in the arcade segment, Midway moved into the growing home video game market beginning in 1996, the same year that it made its  of stock. In 1998, WMS spun off its remaining shares of Midway. Midway was ranked the fourth largest-selling video game publisher in 2000. 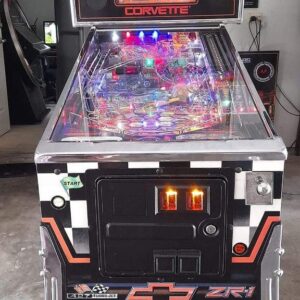 Where a used/secondhand/reconditioned item is not being used in a home, but is instead being placed in a commercial location such as a bar, pub, cafe, restaurant, bowling alley, trampoline park, youth club, office, factory, or similar, we will offer a 30 day on-site service warranty should any problems occur which are not a result of any misuse or malicious damage. This warranty will cover parts and labour.